The psalmist suffered greatly for the Lord. So this great Psalm shows how to overcome discouragement. If you are under attack, discouraged, or weary, study Psalm 119! When the author who was proabably Jeremiah said that he would have perished in his affliction unless he had delighted in God's teaching (119:92), he included loving belief in the God of the Bible and his goodness. He was NOT speaking of habitual reading the Bible out of a sense of obligation, for legalistic habits are not a delight.

Jeremiah as the Author of Psalm 119

These seven things seem to point to JEREMIAH as the most likely author and to captives in Babylon as his most likely audience. There are many other indications that this is the case as well which are covered in detailed studies. 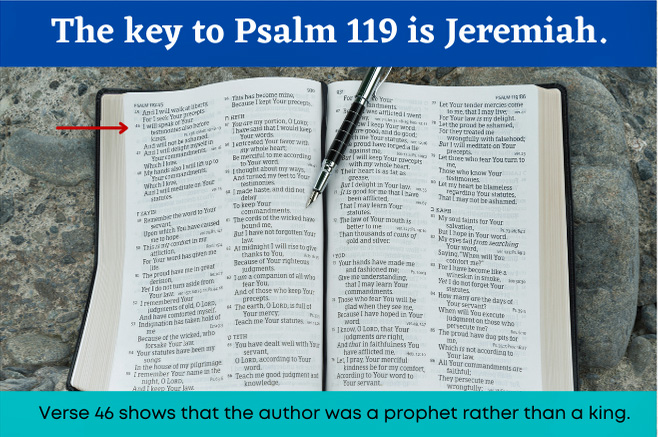 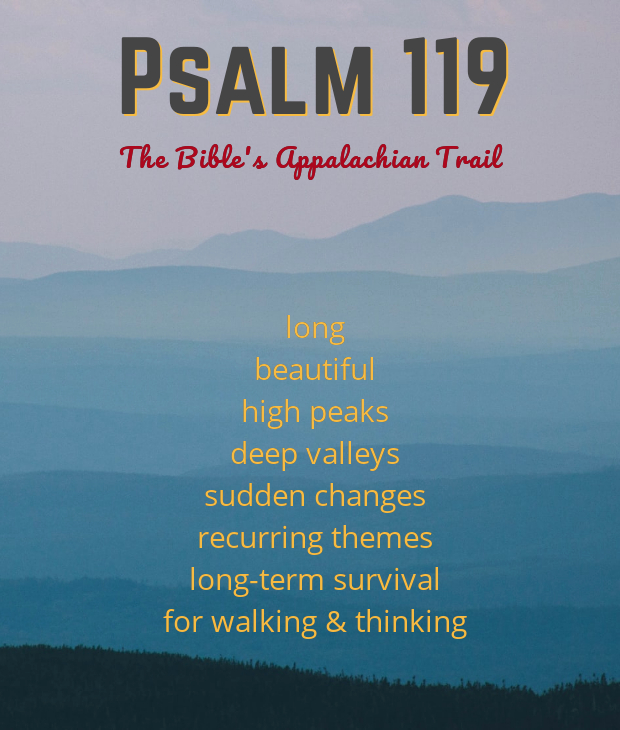 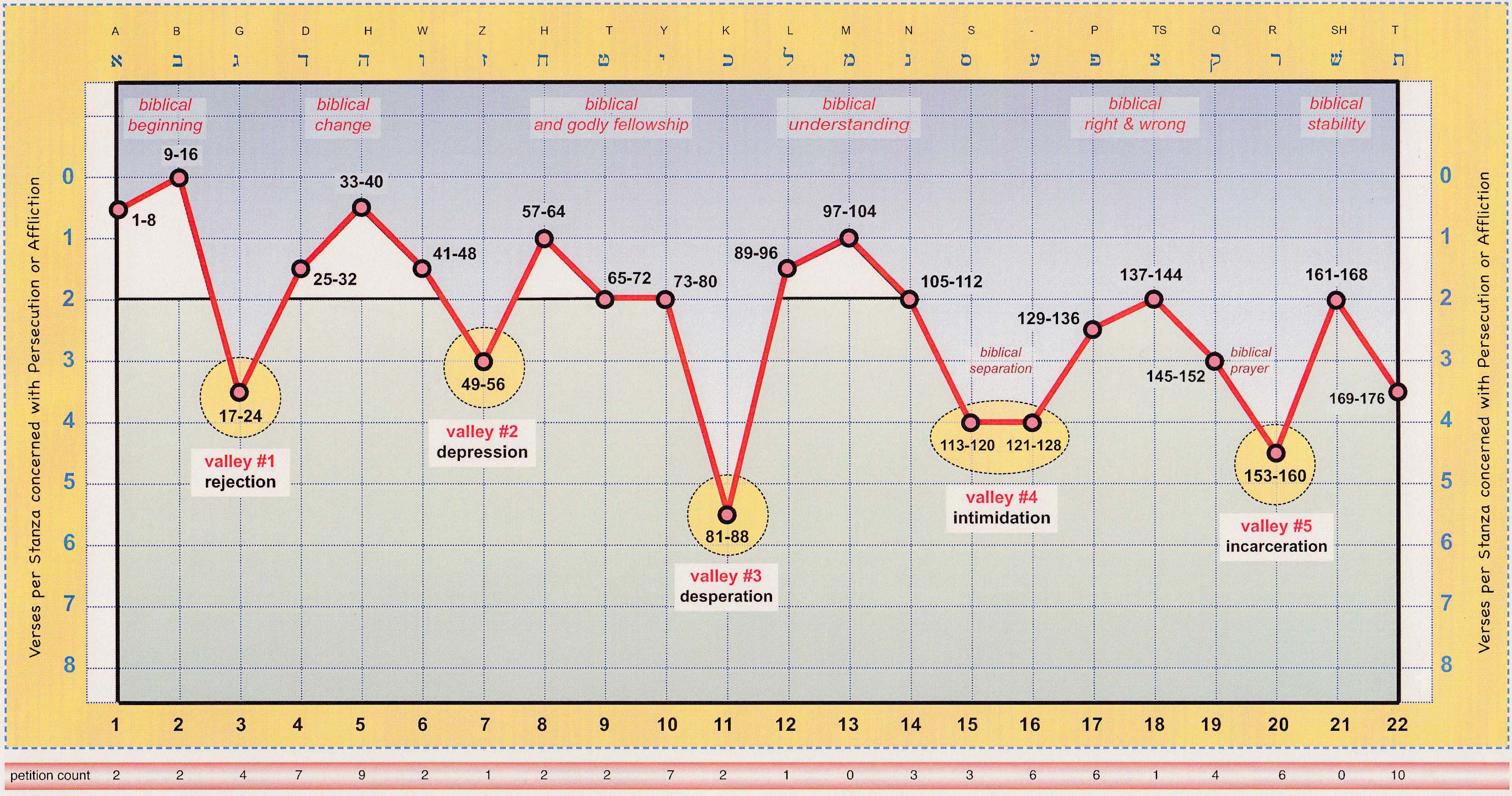 All 22 stanzas of eight verses each have been carefully analyzed to see how relatively difficult things were for the psalmist in each one. This resulted in the graph shown below. It looks much like a mountainous hiking trail. The "valleys" have greater persecution. Part of each study above compares the stanza content to an aspect of thru-hiking the Appalachian Trail. The Psalmist Trail diagram can be taught in an interesting and interactive way using the two game below.

'Find the Other Hiker' Game

First, THE LEADER teaches the basics about the Psalmist Trail diagram, beginning with the fact that there are 22 stanza of eight verse each. Next, the low points on the tail are shown to be because of persecution. Then final point is that at the various high points the psalmist was often concerned about personal sin. His outward struggles were primarily in the valleys, and his inward struggles were mainly at the high points. Second, THE PLAYERS or TEAMS take turns choosing a spot along the trail (a stanza) which the others try to guess by asking a series of questions. One point is earned for each question asked. For instance stanza #5 may be chosen. Then the others ask questions like the following: Are you on the first half of the trail? (yes) Are you in one of the valleys? (no) Are you on top of one of the three peaks in the first half of the trail? (yes) Are there many petitions in your stanza? (yes) Are you in stanza #5? (YES!) Five questions = five points.Third, THE LEADER leads a short Q&A session with open Bibles about the stanza that was the object of the search, stanza #5 above. For instance, he might ask questions like the following. What kind of petitions are there in the fifth stanza? Do you think the psalmist felt spiritually weak? What is your favorite verse in this stanza? Why do you like it? This discussion should be short, but at least one or two solid points should be made. Then the next round begins.

First, THE LEADER teaches the basics about the Psalmist Trail diagram (above), like in the Trail Location Game, emphasizing that outward dangers tend to be in the valleys and the inward dangers are often on the peaks. Second, THE LEADER READS A VERSE or half a verse that has something to do with trouble or danger. The PLAYERS must find the verse in their Bibles. Who ever finds the verse first stands up quickly - without giving the reference. This player earns multiple points. Other players who find the verse more slowly early fewer points. For instance, THE LEADER might read the first half of verse 23. "Prince [rulers] also sit and speak against me," Then he must give one or two about the location of the verse, since Psalm 119 is so long. In this case, he might say, "This verse is in one of the five great valleys." and "It is in the first half of the Psalm." Third, at the end of each round THE LEADER should lead a quick interactive study / discussion on the verse that was found. In the case of verse 23, he might ask, "How did the psalmist overcome the princes? Did he argue and win, or did he do something else?" Again, this discussion should be kept short, but at least one good points should be made. In ANOTHER ROUND the leader might read verse five, "Oh, that my ways were directed to keep your statutes." This is a statement about the psalmist's inner struggle with sin rather than about persecution. As expected, it is in one of the peak stanzas. Again, hints should be given and a bit of teaching done at the end.

Other Studies in Psalm 119

1a. Was the Psalmist Boastful?

The psalmist sounds boastful in 119:98-100, but that was only because he was rejoicing in what the Lord had done for him. God had taught him (102b, 104a), and that was why he had more wisdom and understanding than others (98-100). Likewise, Jeremiah did not naturally know what to say (Jer. 1:6), but the Lord gave him his messages (Jer. 1:7-17). This study is part of the Double-Top or Worldview Compass series in which an individual is usually contrasted with a group. This time, however, the psalmist is contrasted with himself. His struggles are contrasted with his joys. It is on the Men (M) stanza (119:97-104).

1b. The Psalmist was a Model Student.

The psalmist was not boastful in the Mem stanza (119:97-104. Rather he was a model student. He spent much time in God's word and obeyed it. Therefore he understood more about the things that really matter than others, even more than his teachers. This study is part of the Lesser-Known but Significant Leaders series for two reasons. First, the psalmist (Jeremiah?) concealed his identity by not naming himself as as the author. Second, his comparisons with others verses 98-100 and verses like verse 63 show that he was a godly leader even though he was often alone. The prophet Jeremiah was the spiritual leader of his nation but often mostly alone because his message was rejected. Leading in a godly way is often a lonely endeavor.

2. The Psalmist was an Overcomer.

This study is on Psalm 119 as a whole though the main focus is on the last three stanzas (verses 153-176). It shows how the psalmist overcame persecution and the discouragement that comes with lonely, godly, leadership. It is part of the Lesser-Known but Significant Leaders series like study 2b above. The psalmist obviously had a great public ministry for otherwise he would not have faced such great opposition (157, 161). Nevertheless, he rarely wrote anything specific about his work (46). Instead, he overcame his many ene- mies and discouragement by focusing on the Lord himself.Those who speak and think more about their work than they do about the Lord and his Word are not truly serving God.