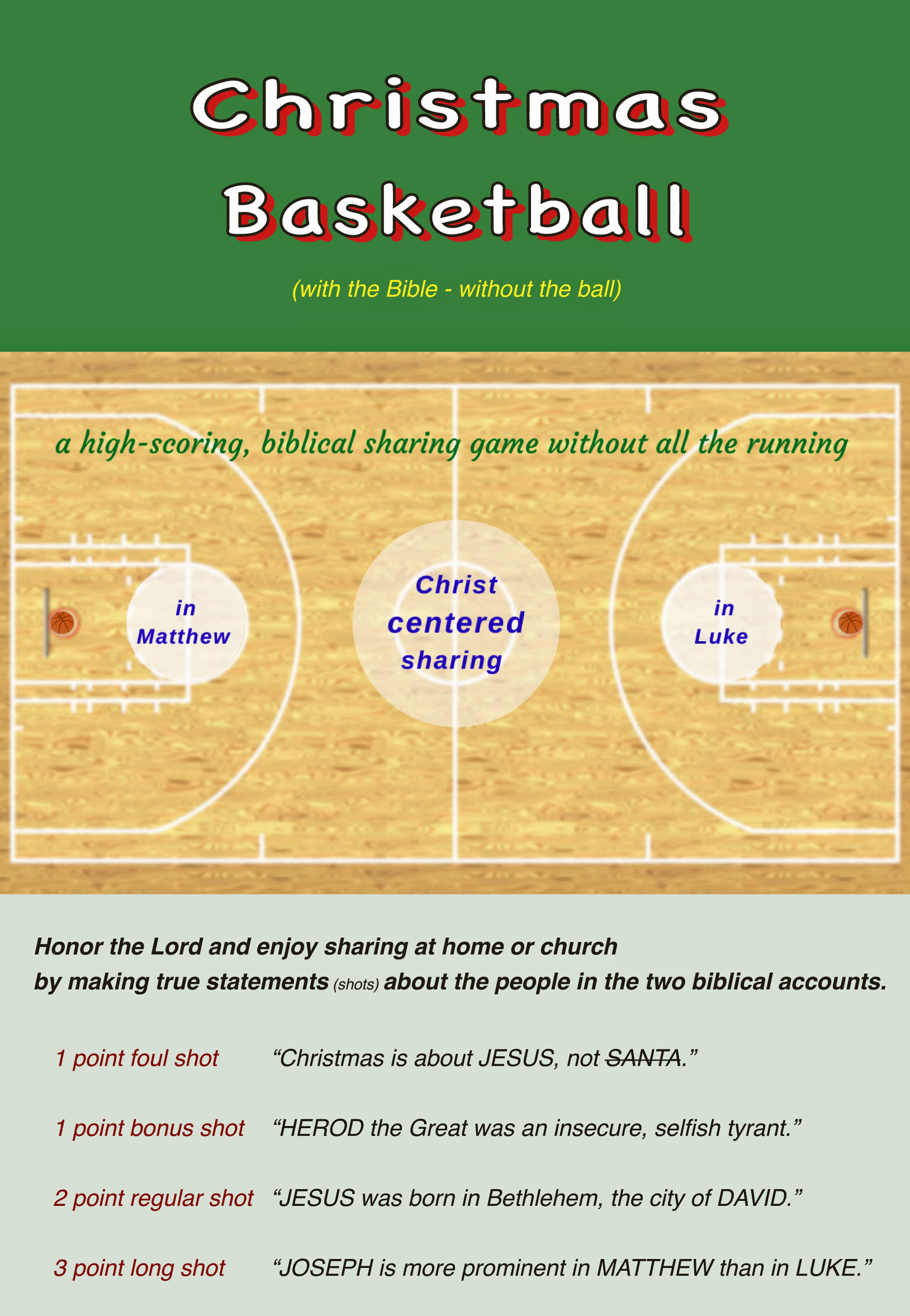 Imagine a Christmas gathering of four to 24 people, most of whom are church members and know the Christmas stories in Matthew and Luke quite well. In order to freely talk about the Savior's birth and have fun while doing so, the host has prepared a Christmas Basketball game, which is a fast-moving sharing session in which nearly everyone enjoys thinking and speaking about the Lord's birth. See the "Scoring Points" notes below to see how one, two, and three point statements are to be made.

This game can be used in various small groups and even with beginners, especially using an open-Bible format. The session can be simplified in various ways, such as by limiting the passages to only those in Luke. (In that case, the wise men and Herod would not be included.) Of course, reading the Christmas passages ahead of time or during the first part of a gathering would be helpful as well, as time allows. . . If the competition is between two teams, the game can be used with large groups as well. Two or more referees may be required, however.

The list below has 15 individuals or groups who are found in the two well-known Christmas passages, Matthew chapter two and / or Luke chapters one and two. Points are scored by using these character names and / or Luke and Matthew in sentences as explained below.

Obviously, Santa Claus is not included in this biblical roster, but see the instructions below about "Foul Shots." 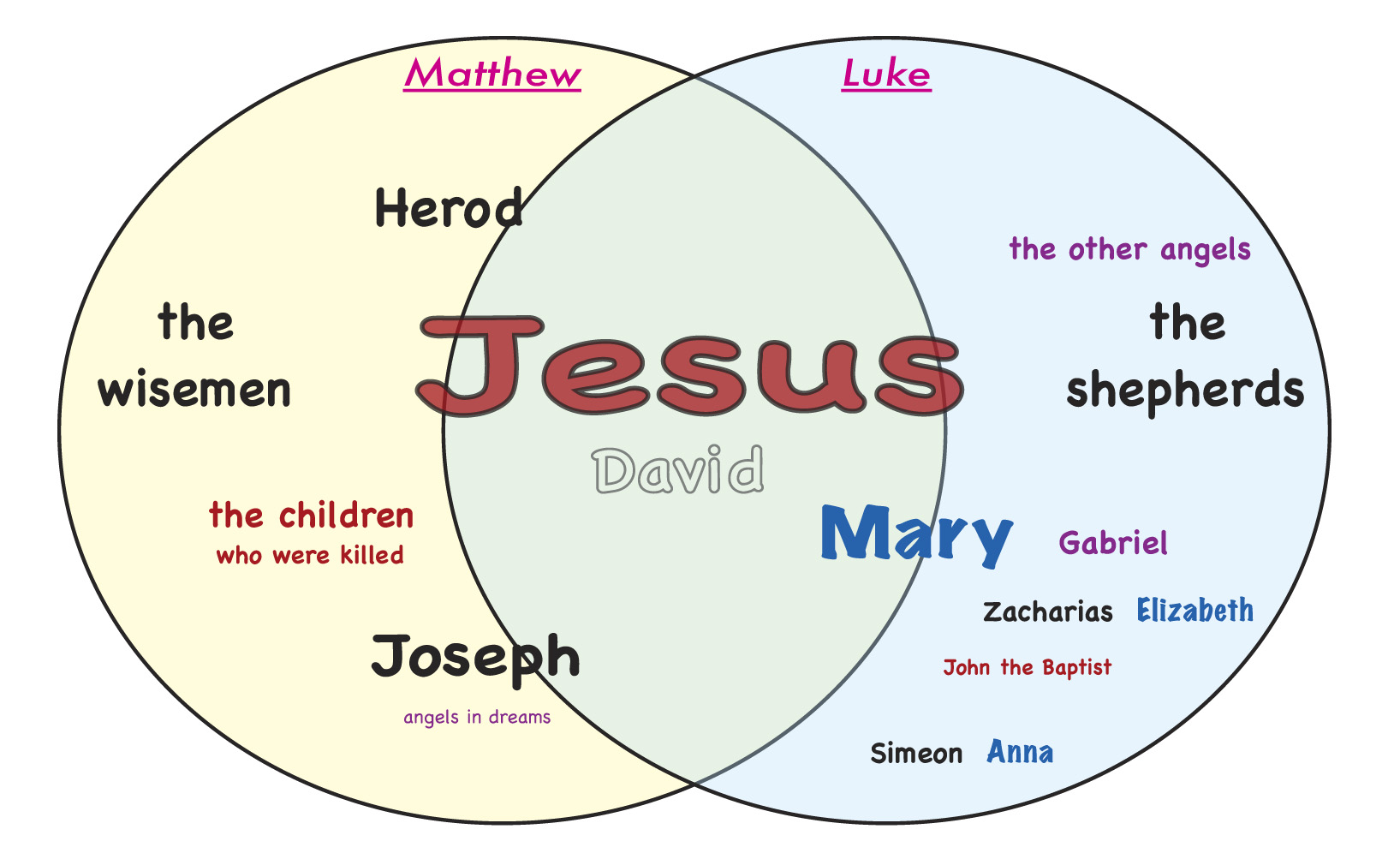 PRINT OUTWe use this concise Christmas summary diagram to promote conversation about the Lord's birth. It is a tremendous teaching tool as is and can be used to make the conversation about those in the Christmas passages more interactive and fun. BUT if you do not wish to use a game format like the one explained below, just print out the diagram and start talking, about the individuals, the groups, and the various combinations. The important think is to talk about the Lord!

ONE-POINT STATEMENTSOne point is scored by making a simple descriptive, true statement about one of the individuals or groups in the above list. For instance, each of the following sentences is worth one point. 'Herod was a bad king.' 'Mary was young.' and 'We do not know anything that Joseph may have said, but we do know what he thought at first.' . . In the early rounds of the "game," participants are only allowed to make simple, one-point statements like these, in which one character in the Christmas story is mentioned.

TWO-POINT STATEMENTSAfter an opening round or two, two-point statements are allowed. For instance, a participant might earn two points with lines like the following in which two characters or groups are included. 'Zacharias and Elizabeth were old and childless.' 'At first, the wise men did not know how bad Herod was.'  'John the Baptist was born about six months before Jesus.' and 'Mary was young, but Elizabeth was not.' . . Lines worth one or two points are allowed during most of the game. In the last few rounds, three-point statements may also be made.

THREE-POINT STATEMENTSThree-point statements include three or more individuals or groups. (No line is worth more than three points, however, even if more than three people are mentioned.) The following three lines are good for three points each. 'Zacharias, Mary, and the shepherds were all surprised.' Both Mary and Jospeph were descendants of King David.' 'Joseph is more prominent in Matthew's Gospel than in Luke.

The children whom Herod killed are often overlooked and are somewhat difficult to talk about. Yet the diagram and list show that various relationships existed around them and that various Christmas Basketball statements can be made about them and others in Matthews account. Notice the points after each line.

Many of the lines above should be discussed. For instance, why are the children only in Matthew's Gospel?

FOUL SHOTSSome participants may wish to speak about various differences between the real Christmas story and tales about Santa. For instance, someone might say, 'Some children actually believe that Christmas is Santa's birthday instead of a celebration of the Savior's birth.' . . This somewhat "foul" line would only be worth one point, since no points are awarded for mentioning Santa. However, since the line would still be correct, an opportunity to give an additional one-point line may be awarded to the speaker if the referee decides the original line was really good. . . Similarly, if a speaker mentions a Bible character who is not one of the 14 listed above, the referee may decide to award an extra "Free Throw" to the speaker. For instance, Someone might say, "I think the wise men were a lot like the Queen of Sheba, since they all came from a far country." This line by itself is only worth one point, but the referee may decide that the speaker deserves a chance to score an additional point.

REPETITIONOne of the key rules, is that the same statement can not be repeated for points unless some significant new information is added to it. For instance, a line about Mary probably being young is worth one point but should not be used again by itself. However, it is possible to score two points later in the game by saying, "Mary was probably young, but Elizabeth certainly was not." The contrast between Mary and Elizabeth brings in significant additional material. So the line is worth two points.

CORRECTIONSThe leaders or referees should speak about various lines including by being corrective when necessary. For instance, a participant might say, "Mary praised God in Luke chapter one, but Jesus said nothing." This statement is technically true, of course, and therefore worth two points, but the leader should point out that the Christmas passages are special. After Luke chapter two, Mary for the most part disappears.

HINTSSome participants may struggle making statements. So the referees and / or team leaders should be prepared to give helpful hints. For instance, some may not realize that negative statements are allowed. 'Herod was not really the king of the Jews.' It is also can be good to suggest comparing two characters, such as King Herod and the wise men. 'The wise men were generous, but Herod was a selfish monster.' Specific verses may be cited as hints as well. For instance, the leader might ask, "What does Luke 2:9 say about the shepherds?" 'They were greatly afraid.'

EVIDENCEIF a participant is able to speak with confidence and knowledge about the Lord's birth, the referee may request collaborating evidence in support of statements that are made. Someone might say that Mary must have been quite young. The referee then may ask, "Why do you think so?" Matthew 13:55-56, which mentions Jesus' several half-brothers and sisters could be cited as evidence in response.

What should be said about the shepherds and those around them? Some of the many lines that could be said are shown below. Notice the point values after each line.

Many of the lines above should be discussed. For instance, why are the shepherds only in Luke's Gospel?

What should be said about Joseph and those around them, especially Mary? Some suggested lines are shown below. Notice the point values after each line. Why is Joseph often overlooked? 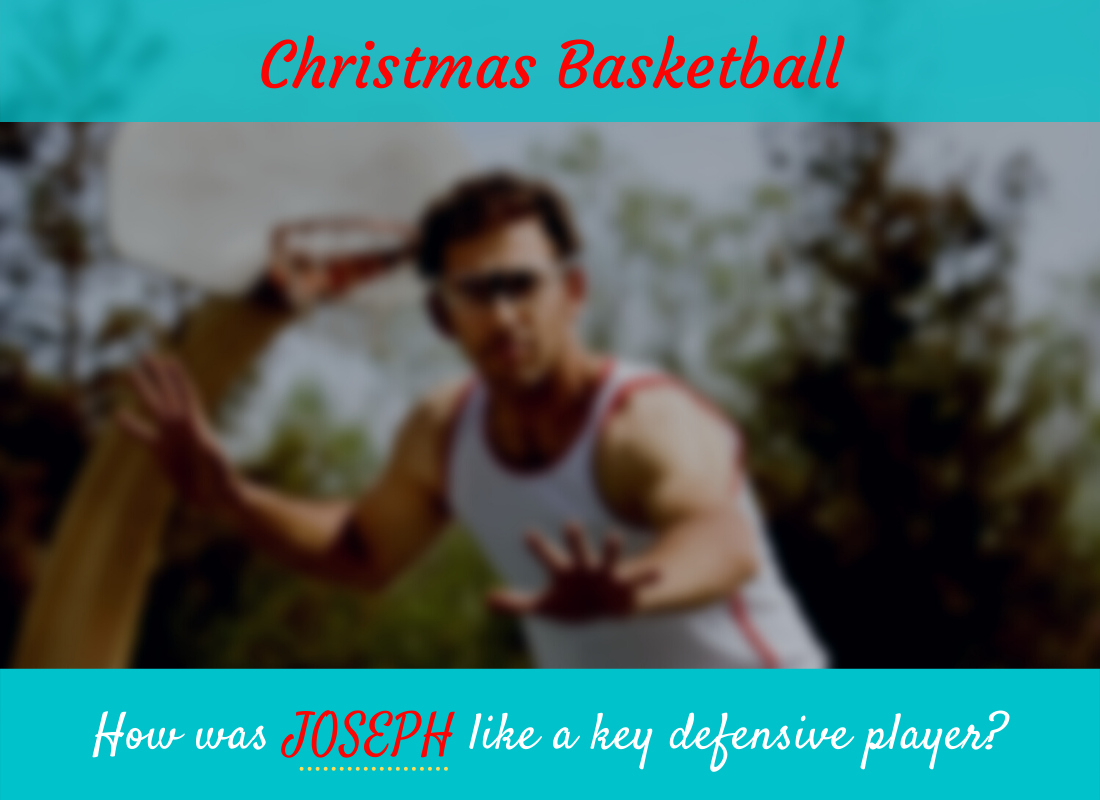 How was Joseph like a key yet overlooked player on a winning basketball team? How was God his Coach, and how was he such a good player? Are there under appreciate people like Joseph in God's work today as well?

The counting of points and the announcement of the winner is not the game's true ending. Rather, the leaders or referees should ask, "What are the most important things that have been said or should be said about the Christmas passages and the leading Bible characters therein?" In response, someone might say that the most important point regarding Christmas in the Matthew account is that God the Father protected Jesus and his earthly mother and guardian (Mary and Jospeh) so that HE would fulfill the divine plan to bring salvation through the line of David to Israel and the world. This long answer could be like a long three-point shot at the end of a basketball game. . . Similarly, regarding Christmas in Luke's account, one might say that the bottom line is that thought such had been long anticipated, God still surprised humanity with special angelic announcements regarding His amazing grace and ability to bring Himself into the world as the Savior, through a lowly but godly Jewish virgin. This or a similar answer would be like another great, long, three-point shot at the end of a game.