Second Peter 1:5-7 is a special passage.It is not just a list. Each virtue builds upon the one that precedes it, much like each verb in Romans 8:29-30 builds upon the preceding verb. In Romans, we see (for example) that glorification logically follows justification, and our Second Peter passage shows that courageously doing good (virtue) is possible because of faith. (See Hebrews chapter 11.) In Romans chapter eight, Paul shows how salvation is complete, and in Second Peter chapter one Peter shows what the complete Christian life is like. The technical term for orderly stacks of terms like these which form a wholistic set is sorites.

Lessons from gem cuttingThe teaching in Romans 8:29-30 and 2 Peter 1:5-7 is highly concentrated. So these two passages must be studied with careful attention given to the detail and order. As diamond cutters must work carefully because the consequences of even a small error are great, so too, there are serious, eternal consequences of living or not living in light of Peter's ordered virtues. See 2 Peter 1:8-11. The facets of a cut diamond give it its sparkle, and it is the linking of the various virtues in Peter's gem which is most enlightening rather than each of the virtues by themselves. So how the adding of one virtue to another is done is the main focus of the video messages below. 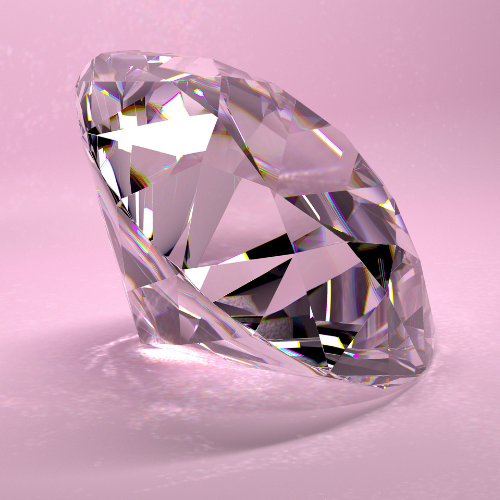 LIKE THE PYRAMIDS?Peter's system of virtue has stood the test of time, throughout the church age, nearly two thousand years. In this sense, it is somewhat like the ancient pyramids of Egypt. The foundation of biblical faith is steadfast and sure. Yet, unlike the pyramids, the internal structure of God's system of virtue is clearly visible, as shown in the diagram below. Unlike the Pharaohs, God wants his people to understand how the various aspects of the Christian life connect, how it was made. 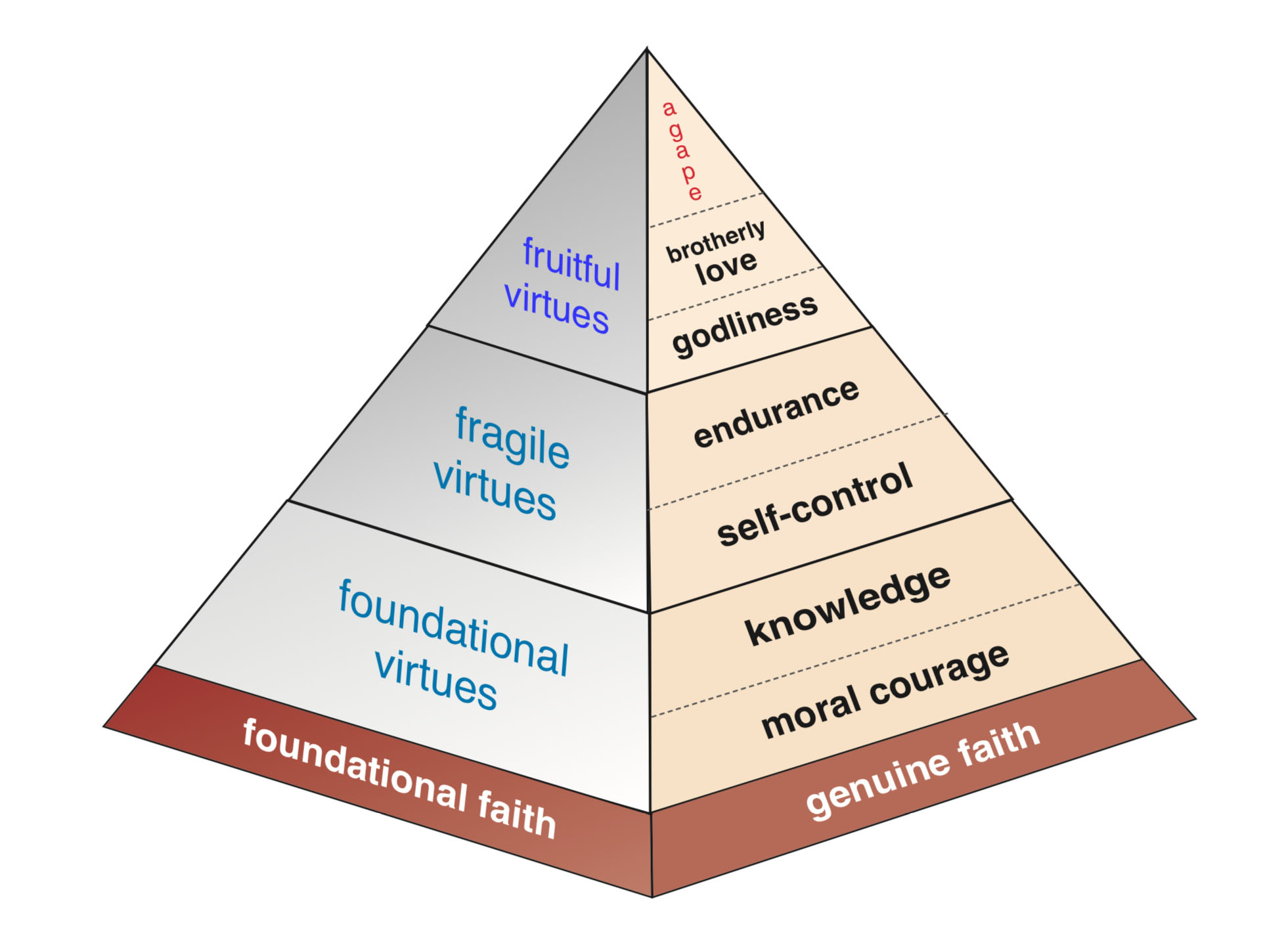 GROUPING THE FOUNDATIONAL VIRTUESMoral courage and knowledge are foundation, but genuine biblical faith is even more so. Peter's teaching on the trustworthiness of the Scriptures later in the chapter (2 Pet. 19-21) shows this as well as the order in 1:5.

GROUPING THE FRAGILE VIRTUESSelf-control and endurance are said to be fragile virtues because the lack of such is a common problem and easy to see. Yet, as the pyramid structure shows the true believer can be firm and overcome temptation and persecution. Joseph in Genesis is a great example of one who was strong in this regard.

GROUPING THE FRUITFUL VIRTUESBrotherly love and agape love obviously go together, but what about godliness? To be godly is to serve God directly through prayer and worship. This has a higher priority than serving God indirectly by helping others. All three of the top three virtues have to do with Christian service.

THE FOUR SIDESThe pyramids of Egypt have four sides which are carefully aligned with compass points. Likewise, the four verses which follow Peter's pyramid of virtue (1:8-11) show four results of living or not living in line with God's design (1:5-7).

Orchids are floral gems.The blossoms are especially beautiful. Likewise, the top three virtues in 2 Peter 1:5-7, godliness, brotherly love, and agape love, are those which are most admired for their beauty. This is natural, of course, but the root system which is like genuine, biblical faith is often forgotten. Likewise the leaves of the orchid are vitally important as well. These correspond to virtue (faith-based courage) and biblical knowledge. Without leaves the orchid will not grow, and without growth in the knowledge of the Lord Jesus the Christian is in danger of being led astray (2 Peter 3:17-18). So though the roots and leaves do not usually get much attention, they are very important. Every part of the orchid and every virtue in Peter's system is needed.

Orchid stems can be weak.The heavy blossoms and buds of an orchid can overburden the stems so that the blossoms fall to the ground. The stems may even break. So as in this photo, supporting rods are often added to help the stems hold up the blossoms. The stems of the orchid therefore can illustrate the two middle virtues in Peter's system, self-control and endurance. These two are the weak points where moral failure is often seen in the lives of Bible characters. For instance, Solomon's lack of self-control regarding women and riches led to his downfall despite his great biblical knowledge and personal faith. In contrast to Solomon, Joseph however resisted temptation and endured through many years of imprisonment. 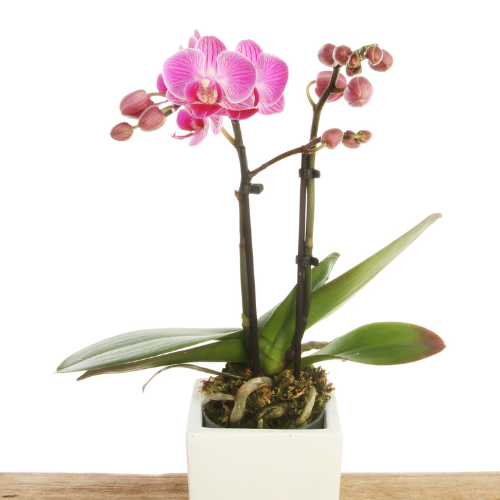 WHOLENESS & INTEGRITYPeter's gem of virtue can be expressed in the language of mathematics. In line with the fundamental theorem of calculus, one of the main points to be remembered regarding Peter's linked set of virtues is that none of the eight can be skipped. For instance, an individual might have great faith and knowledge of the Scriptures, but without self-control or endurance he or she would not be a whole person in Christ. 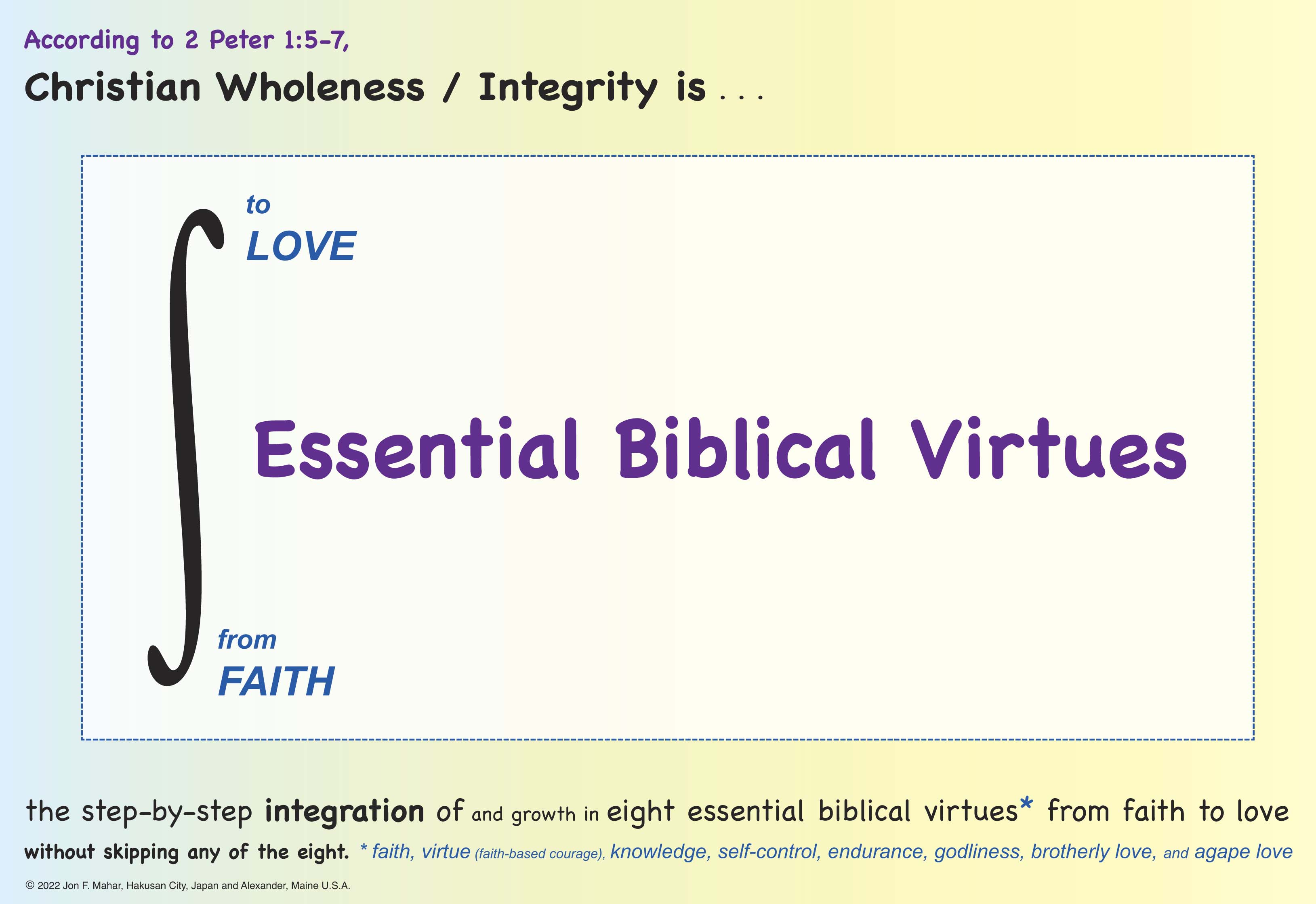 MORE THAN SIMPLE ADDITIONThe long "S" symbol for integration (above) represents summation, but more than simple addition. It is a linking of the virtues with one another. For instance, when self-control is added to knowledge, biblical knowledge becomes part of the self-control. More basically, saving faith is part of all the virtues which are added to it. So Christian integrity or wholeness is more than just a simple sum of eight virtues. As shown in the various video messages in the first section, as well, the relationship between the virtues is much more than just simple addition.

Overshadowed by the Fruit of the Spirit.Peter's hierarchy of love (2 Peter 1:5-7) is studied much less that the Fruit of the Spirit (Galatians 5:22-23) even though the subject matter, regarding love for instance, is somewhat alike. Why is this? One reason is because Galatians with its anti-law emphasis is much more popular with libertarians than Second Peter with its opposition to covetous false teachers in chapter two and worldly mocking and unbelief in chapter three. In addition, personal responsibility to add the virtues is more clearly stated in Peter's set than it is in Paul's famous spiritual list.

"But the fruit of the Spirit is love, joy, peace, longsuffering, kindness, goodness, faithfulness, gentleness, self-control. Against such there is no law. And those who are Christ’s have crucified the flesh with its passions and desires. If we live in the Spirit, let us also walk in the Spirit." (Galatians 5:22-25)

The Virtue ProblemAnother and perhaps bigger problem is the fact that there is one particular term in Peter's set which is especially difficult to understand. What does "virtue" in verse five mean? Most ordinary readers are quick to observe that all the key terms in 2 Peter 1:5-7 are virtues. So they wonder how can one of the terms be such in a special way.The Verbal SolutionThe first video message below points to a two-fold solution to this problem. First, the nouns in Peter's set should each be linked to their corresponding verbs. In this way, virtue in verse five is associated with doing good. Next, the verbal concept of doing good should be linked with the preceding term faith which makes this doing of good possible. It then becomes clear that adding virtue to faith means to do good based on faith. Moreover, this usually involves having courage, as seen in Hebrews chapter 11, the great "by faith" chapter. 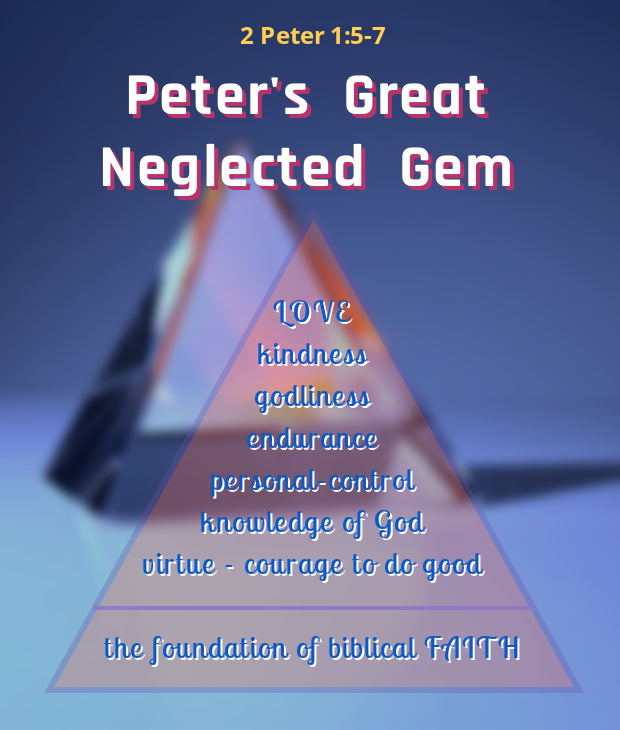 This is a six minute video on the meaning of virtue in 2 Peter 1:5 and on how to add virtue to your faith. It also demonstrates a way of using the Describe-It-Yourself cards in teaching.

2 Peter 1:5 And beside this, giving all diligence, add to your faith virtue; and to virtue knowledge;

This is a 13 minute video on the meaning of knowledge in 2 Peter 1:5 and on how to add knowledge to your virtue. It also demonstrates a way of using the Describe-It-Yourself cards in teaching.

2 Peter 1:5 And beside this, giving all diligence, add to your faith virtue; and to virtue knowledge;

The Scriptures are thought-provoking, and this is a key factor in adding biblical knowledge to our lives.

This is nine minute video on the meaning of self-control (temperance) in 2 Peter 1:6 and on how to add self-control to knowledge. It also demonstrates a way of using the Describe-It-Yourself cards in teaching. 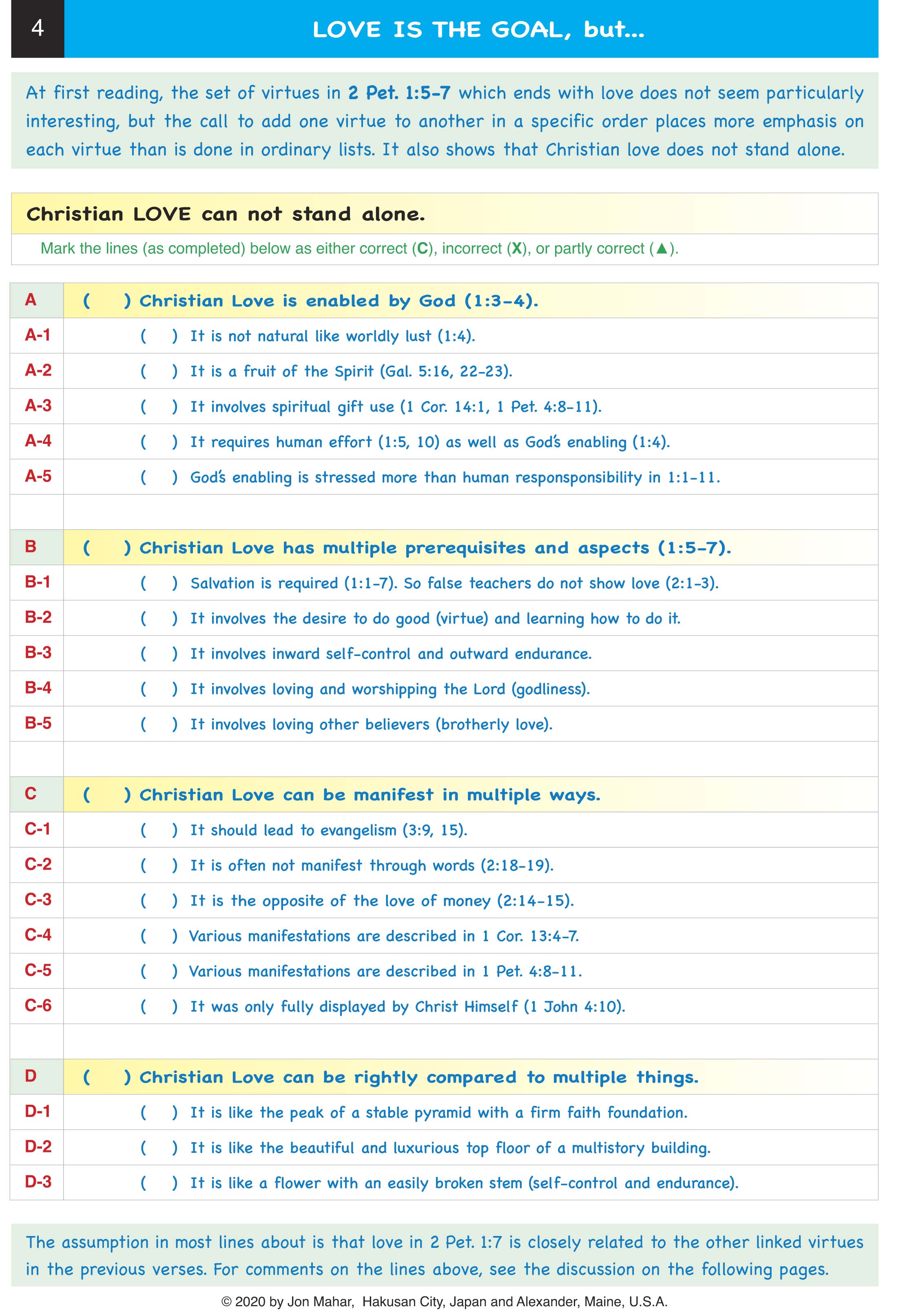 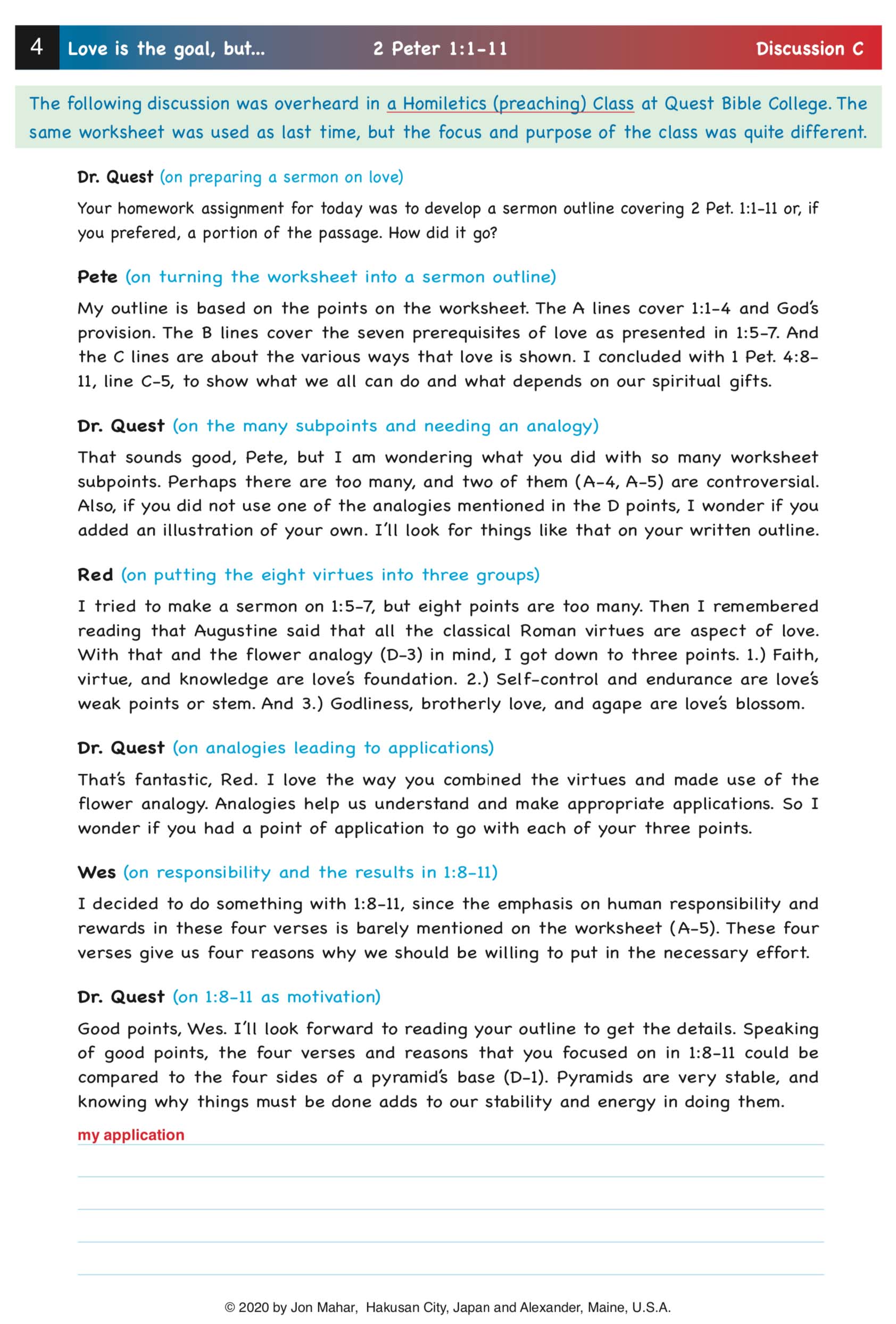 All materials on this website may be freely copied and printed for personal, home, church, and school use, but they may not be sold. All commercial rights are reserved by the author / Toa Ministries. -- Additional free material is available upon request via the form on the CONTACT page.