Why is the Lord's Prayer so CONCISE? 1.) As the context (6:5-7) shows, making long prayers in order to be seen by others is hypocritical. 2.) Long prayers are also unnecessary because the Father knows what his people need before we ask (6:8). 3.) Finally, the Lord's Prayer is amazingly complete without being long. Much is covered in just a few lines and words. For instance, "bread" in 6:11 probably represents various physical needs. (See 6:25 in which clothing is also mentioned.)

How is the Lord's Prayer HEALTHY? 1.) The main reason is because it is always healthy in every way to put God first. 2.) It is also healthy to free oneself from worry day by day by trusting the Father regarding daily needs (6:11). 3.) Third, in order to be healthy in various ways, one must deal with personal sin and be forgiven. 4.) Avoiding sin in the first place is like preventative medicine (6:13). 5.) Ongoing good relationships with other people is healthy as well. (A biblical fellowship setting is assumed.) 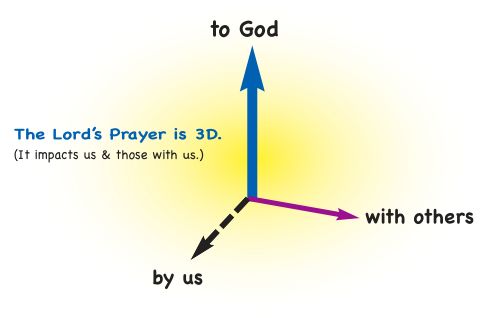 How is the Lord's Prayer OTHER WORLDLY? 1.) It is about being unlike worried and worldly unbelievers. 2.) It is a prayer for the world to be dramatically changed to conform to God's will (6:10). 3.) Yet, in a way, the Lord's Prayer is NOT other worldly, because it is also wonderfully practical and balanced.

How is the Lord's Prayer BALANCED? 1.) It begins with a close relationship with God as Father (6:9a) in which HE is honored and taken seriously (6:9b). He is close but also highly honored. 2.) The prayer is balanced because it deals with both the vertical relationship with God and horizontal matters here on earth. 3.) The Lord's Prayer is positive and hopeful as well as honestly negative about sin and temptation (6:12-13). 4.) Finally, it is balances in that needs are prayed about without doing so selfish. When God is put first, it is not selfish to also pray about personal needs. 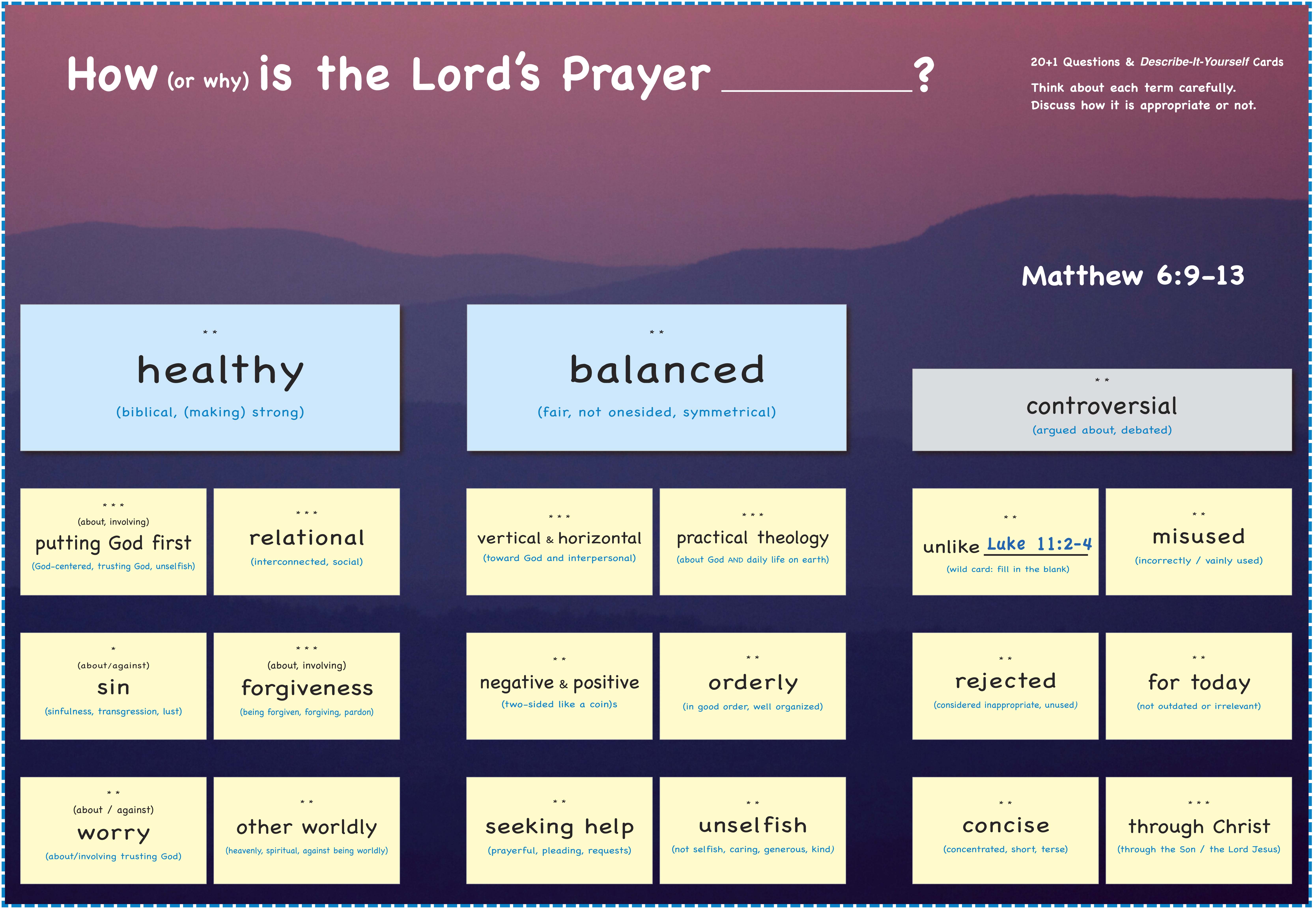 How is the Lord's Prayer MISUSED? 1.) It is often prayed repeatedly in an attempt to earn merit with God by religious people who do not truly know the Father through his Son. 2.) It is sometimes vainly prayed by genuine Christians as well because not much thought is given to the meaning.

Why is the Lord's Prayer REJECTED by some? 1.) It is rejected by those who believe it is not a Christian prayer since it was taught to Jewish believers before the church began in Acts chapter two. 2.) Also, it is criticized because it is not offered in Jesus' name.

Why and how is the Lord's Prayer FOR TODAY? It is a Christian prayer in various ways. 1.) It was taught to Jesus' first disciples (5:1). 2.) Matthew and Luke which contain it were written during the church age for Christians. 3.) As Jesus taught later in John 14:6-7, one can only come to the Father through the Son. Though the Father-through-the-Son teaching came later, it did come and must not be rejected. . . . 4.) The Lord's Prayer is also for today literally because of our need for "daily bread" a day at a time (6:11).

How is the Lord's Prayer CONTROVERSIAL? 1.) As explained above, it is wrongly rejected by some. 2.) The meaning of God's kingdom in 6:10 and 6:13 is debated. We believe that such is mainly about God's literal eschatological reign of earth during the millennium. Christians are to pray for the Lord's return (Rev. 22:20) and Matthew 6:10 provides a way to do so. . . . 3.) The ending is controversial. The traditional ending—"For Thine is the kingdom and the power and the glory forever. Amen"—is found in most Greek manuscripts of Matthew 6:13 and fits well in Matthew and the Sermon on the Mount. -- It is not surprising that this ending is missing in Luke 11:4 since the setting and emphasis in Luke is different.

How is the Lord's Prayer ORDERLY? 1.) God and his program comes first in Mat. 6:9-10 and is in the traditional final line in Mat. 6:13b. 2.) Our personal needs and relationships with others are important, but they are in the middle portion of the prayer, in 6:11-13a. . . . Therefore as a whole, the Lord's Prayer shows that our thoughts, prayers, and lives should begin and end with God and his will. (This point is also made in 6:31-33.) It is safe to do so, because God is a loving (6:9, 26) and powerful Father (6:13) of those who are his. When we begin and end with Him, we have peace of mind. When we begin or end with ourselves, we do not.

How is the Lord's Prayer NECESSARY? This is a bonus question since the "necessary" card is one of seven bonus cards which are not used on summary diagram but are included with the set. . . . 1.) Of course, the Lord's Prayer is NOT necessary for salvation. 2.) Neither is it necessary in an absolute sense regarding needs because the Father knows what we need before we ask (6:8). 3.) More than being a necessity, we are privileged in Christ to be able to address God as Father. . . . 4.) Nevertheless, the Lord's Prayer and the beliefs and attitudes expressed therein are necessary for our spiritual, mental, moral, and relational health. So they are clearly taught elsewhere in the Sermon on the Mount as well. See 6:14-15, 19-34 and 7:1-11. Biblical prayer changes us.

BE SURE TO CHECK OUT how to use the cards in this study for a fun, educational Describe-It-Yourself game as explained at the bottom of this page.

DESCRIBE-IT-YOURSELF Educational Game on the LORD'S PRAYER in Matthew

Participants (individuals or teams) take turns describing the Lord's Prayer, in line with the 21+ cards. One game point is awarded for each valid point that is made in a limited time period. See the notes above for examples of valid points.

GAME DIRECTIONS: 1.) First, read the passage. 2.) Second, the leader should demonstrate how game points can be earned. 3.) If the group is mostly children or beginners, forming teams is usually helpful. 4.) Teams or individual players take turns drawing a card and speaking about how the descriptive term or phrase on it is appropriate or not. (Sometimes it is partly right and partly wrong.) 5.) One or two minutes is often long enough, but beginners can be allowed more time. 6.) The leader may also give hints to help children and beginners.