Check out these four great ways to study Judges.

Gideon (#48) and Samuel (#16) are the only two judges that are on the Top 55 list, and, of course, Samuel is in the book which bares his name rather than Judges. The various Jewish kings who came later are mention more. Samson who is ranked #57 almost made it onto the list. There is a one-page study on Gideon in the Top 55 booklet. DISCUSSION IDEAS: use several Top 55 cards to help discuss the differences between the judges, the kings, and Moses and Joshua who also led the nation. Next discuss why most judges are not on the Top 55 list while Gideon and many kings are. Compare Gideon and Samson, including how their lives and ministries ended. You may wish to make up a special card for Samson (#57) to use as a visual as you do so.

P(h)urah comes to our attention at a critical moment in the life of Gideon, shortly before the famous, night-time attack by Gideon’s three hundred (Judges 7:19-22). Perhaps that great victory would never have been if it were not for P(h)urah’s help. The Lord suggested that Gideon take P(h)rah with him and go into the Midianite camp if he was fearful. God did not directly say that Gideon was afraid to go into the Midianite camp by himself, but the conditional (“if”) clause in 7:10 and his subsequent action imply that he was. Perhaps the most important point about P(h)urah is that he was the helper that Gideon needed at the time. May we be willing to serve the Lord by assisting other God-given leaders as P(h)urah did Gideon. -- One of two worksheets in this study is shown below. Are the lines all correct? 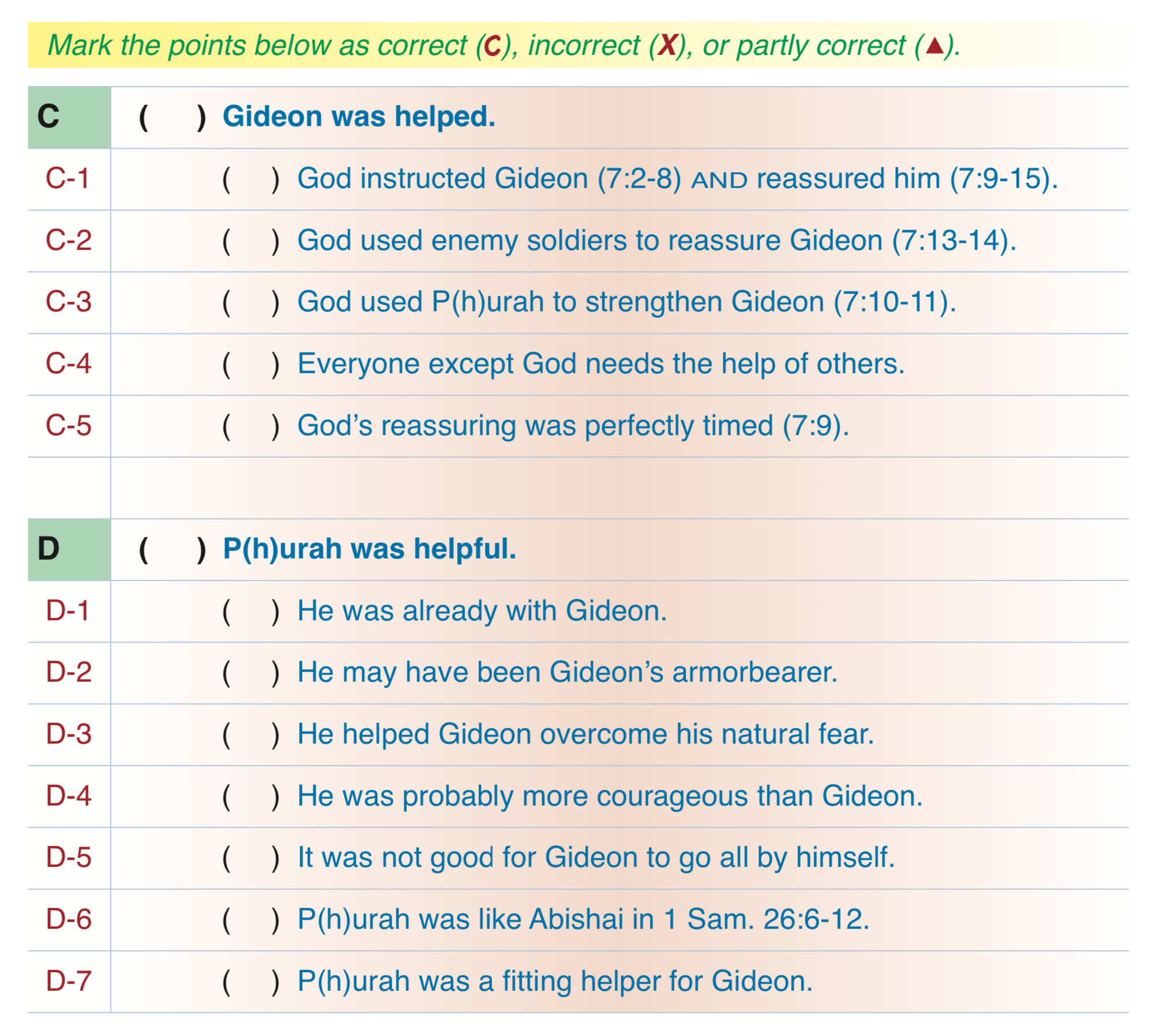 Abimelech, a wicked son of Gideon, is notorious for killing 70 of his brothers in order to become king (Judges 9:1- 5), but the ministry of Gideon’s youngest son  (9:7-20), Jotham, against Abimelech is easily overlooked. Jotham's parable drew a powerful parallel between the trees selecting the bramble bush as their king and the men of Shechem choosing Abimelech. The bottom line in this study is that we should be like Jotham, even though, like him, we are not prophets. We too should speak about and pray for God’s will to be done on earth as it is in heaven. Which of the positive worksheet lines below are correct? Which are not? 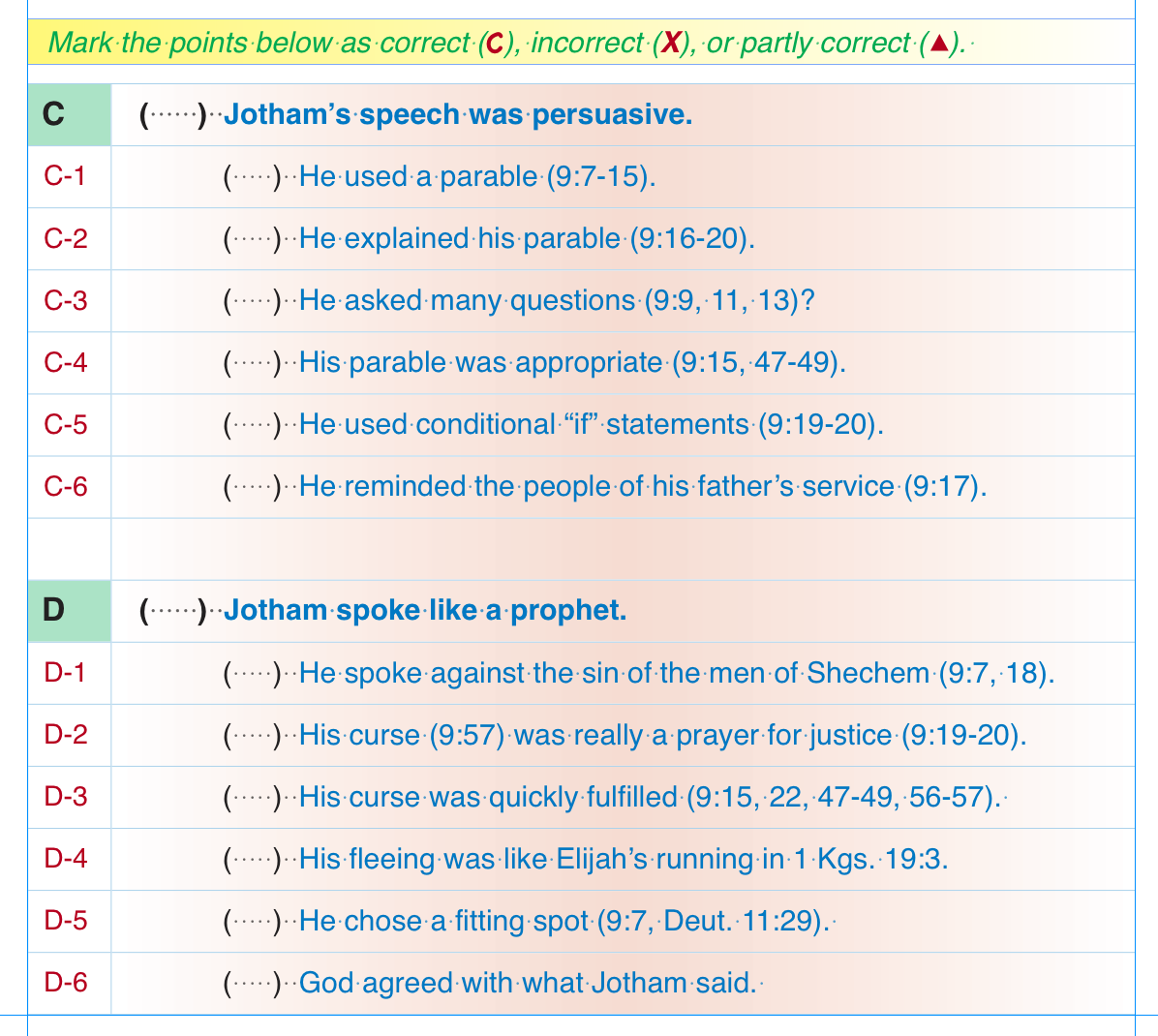 Ibzan, Elon, and Abdon served as judges over a period of 25 years after Jephthah and before the much better known Samson. (See Judges 12:8-15.) Unlike other judges, apparently they did not need to fight foreign enemies. Ibzan and Abdon were apparently very active at home, however, since they had many children who must have been borne by several women. Elon may have been the only one of the three who was not a polygamist. Yet, the main thing reported about them may be that there was peace while they judged Israel. So the worksheet below has many positive lines about the three men, though some of the lines are not correct. Which ones? 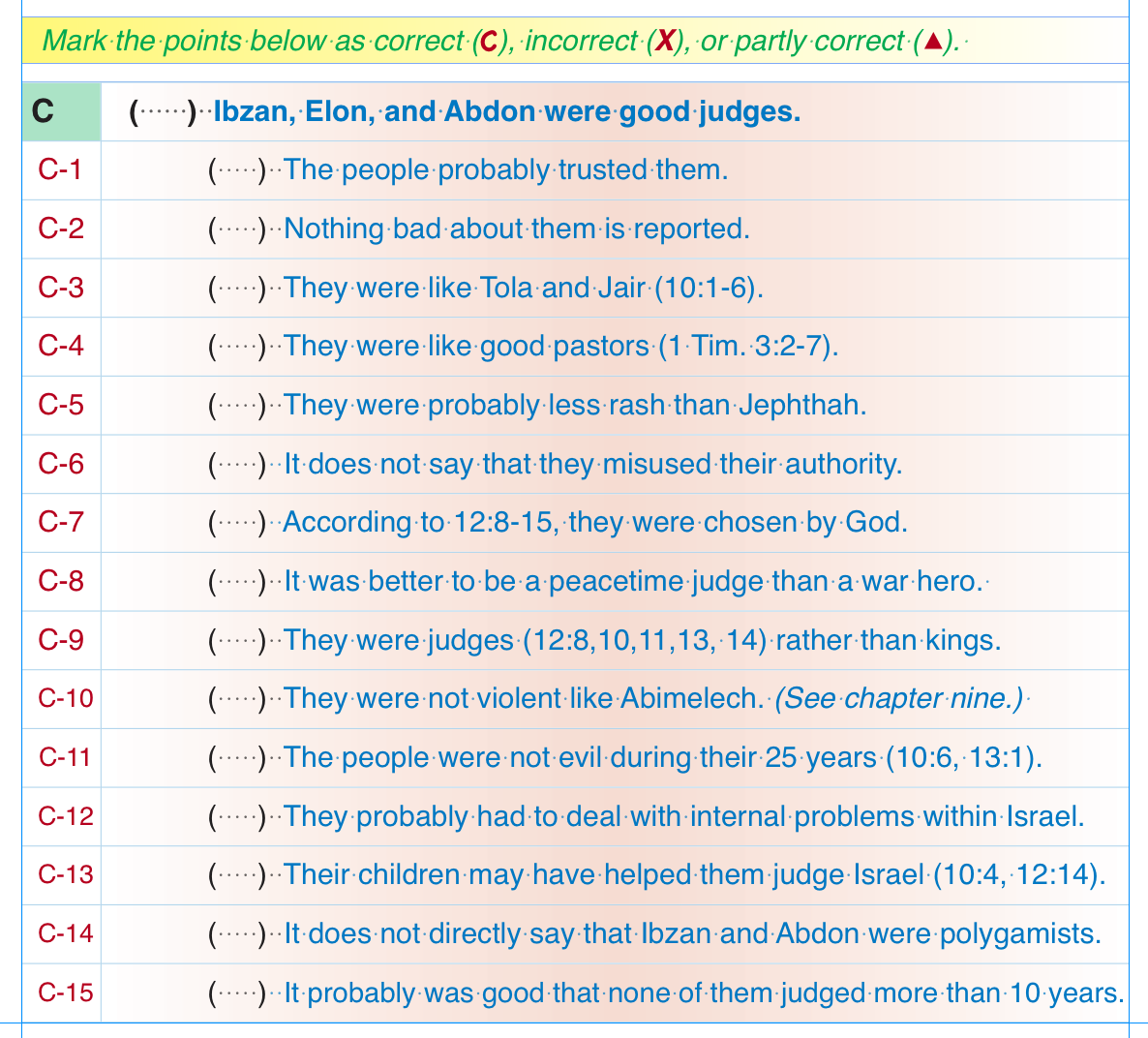 This well-known story is told in a creative twist in this study. As we know, Samson lost his God-given strength through his relationship with Delilah and as a result was captured, blinded, and forced to work like a draft animal. This is of course sad, but in this study, the focus is placed on the contrast between the sad first part of the story in which God is not mentioned and the happier ending in which God answers Samson's prayer. So many of the positive worsheet lines below are correct.

6a. The Danites Ungodly Move

This study is titled Syncretism in Godless Times the set of several studies on Bible passages in which God is never or rarely mentioned. Although the Lord is mentioned four times in Judges chapter 18, he not really honored. The tribe of Dan talked about the Lord but worshipped idols. DISCUSSION IDEA: Discuss the role that key individuals played in the first part of Judges and contrast this with whole tribes collectively going astray at the end of the book, in chapters 17-20.

6b. The Danites Bad Idea

Like the study above, this is on the tribe of Dan's move to an area north of the Sea of Galilee as recorded in Judges chapter 18. However, this time the four-step I.D.E.A. Bible Studies method is used and the focus is on why the move was a bad idea. -- The final section of the notes for this study, the part about assurance, is shown below.

DISCUSSION SUGGESTION: It is obvious that the people of Dan should have consulted a better counselor. The young Levite was more like a false prophet. Are there bad "Christian" counselors among us today? If so, how are they different from good ones?